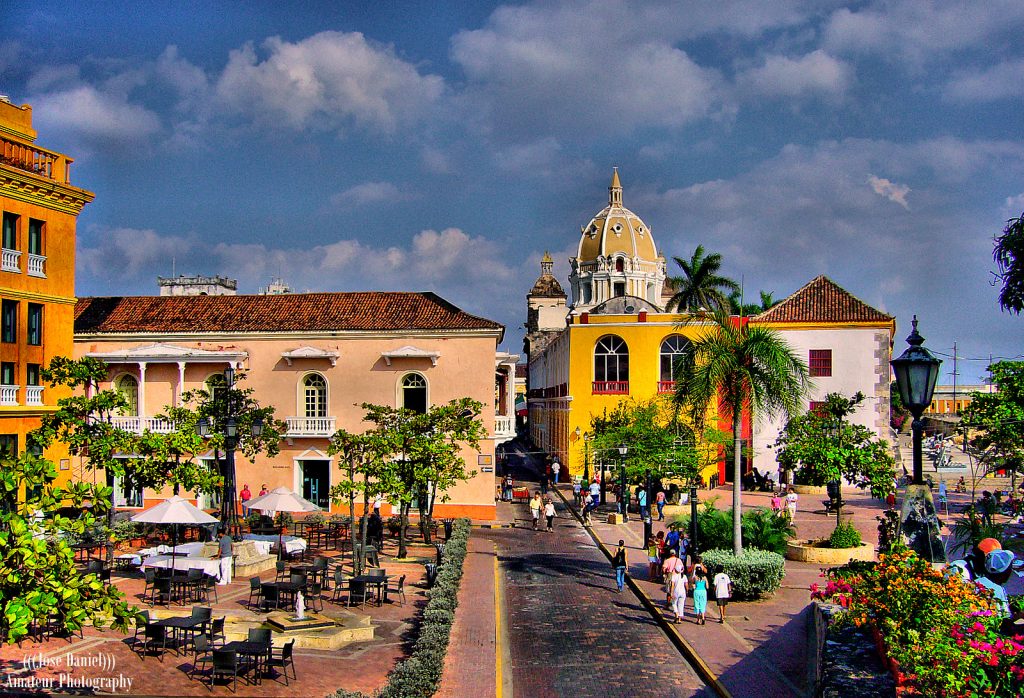 This city has almost 500 years of extraordinary history and is the most romantic city in the Americas. It’s probably the best-preserved walled city, protected not only against time and the ocean but also, thanks to its peninsular location, from the modernizing influences of the mainland. The best way to see the city is to set off on a zigzag around streets whose names hark back to those restive pre-independence days; Mercy Street, Tobacco Street, Barracks Street, Prohibition of Firewater Street (seriously!).

As many saints’ names are crammed into its plazas and alleys as is physically possible – the center is only six blocks by six – and there were once dozens of churches as well as monasteries and convents. The buildings of these are now largely taken over by hotels and tourist services. Behind the whitewashed, ochre and terracotta façades there are gorgeous bars, cafés, art galleries, antique stores, restaurants and fashion boutiques. Walking along, go ahead and peek into inner patios. The grander properties have two and sometimes three courtyards, with a traditional aljibe – or well – at the center of the largest.

In Cartagena, glimpses of the sea at one or other end of the street eventually draw you out of the maze of the center and toward the bulwarks. As the sun cools and slips west, we suggest a walk along the old sea wall. It is a nice stroll for watching the pelicans and magnificent frigate birds settle for the night.

Things to do in Cartagena

The wedding will take place inside the historic center, which is inside the fortress walls. We encourage you to stay in this area and not to venture far off. The historic city center is relatively small, with limited car access, making it pedestrian friendly. If you’re trying to find a place in the city or happen to get lost, you can ask any of the locals to help you find your way around and you’ll get a chance to practice your Spanish!

If you are feeling adventurous and feel like exploring the city, here are some of the things we recommend.

Plaza Santo Domingo
Enjoy a freshly made natural juice in the charming "Plaza Santo Domingo". You can sit at one of the cafes in the square and enjoy people watching. Take a photo with "La Gordita", Fernando Botero's famous fat lady statue.

Palace of the Inquisition
Stop by the "Palacio de la Inquisicion" just off Plaza Bolivar to see the ancient site of judgement and the tools of torture used by the Spanish Inquisition. Constructed in the 18th century, the Palace of the Inquisition is one of the most impressive examples of Spanish colonial architecture in Cartagena and its grandiose baroque entrance, interior patio, and expansive gardens are testimony to the seriousness with which Colombia's 18th century rulers took to the task of freeing heretics from the demons that threatened their passage to heaven. The Holy Office, as the Spanish Church euphemistically termed its torture division, was first established in Cartagena in 1610 and continued its gruesome trade until independence in 1811.

Castle of San Felipe de Barajas
Visit the Castle of San Felipe de Barajas, one of the most spectacular sites in Cartagena. Designed by the Dutch engineer Richard Carr, and built from 1656-1769 by the Spanish, it was used for protection against pirates while shipping gold out to Europe. This magnificent fortress is the largest ever built by Spanish conquistadores in all of its colonies and the proof that the pirates of the Caribbean did exist. Climb and explore the castle in the early morning or late afternoon to watch the sun sink behind the rampart walls.

Plaza de Bolivar & Cathedral San Pedro Claver
Take a stroll through the Plaza Bolivar. Recently restored, it is a lovely place to sit and people watch. Buy a slice of fresh watermelon from one of the "palenquera" vendors. While there you can check out the massive statue of Simon Bolivar, enjoy dancing by local street performers, or walk over to the "Catedral de San Pedro Claver," which dates back to 1575. Wander into this cathedral and learn the fascinating history of the building, that includes being partially destroyed by Sir Francis Drake in 1587. San Pedro was a Spanish Jesuit who baptized hundreds of thousands of African slaves. Look for the stained-glass window and the dramatic series of paintings that depict his life. For those who may not be familiar with the work and life of the priest known as the "slave to the slaves," it is a chance to learn human rights history and to appreciate the reality that this has been a fight involving the dedication of many, over a period of millennia. Learn more here!

Las Bóvedas
"Las Bóvedas" means "The Vaults" in Spanish. They were originally built for military purposes in the late 18th century to store munitions. They were later used as a dungeon during the civil wars of the independence era period, and it's said that at high tide, the prisoners would be up to their knees in sea water. "Las Bóvedas" has 47 arches and 23 domes and was constructed by engineer Antonio de Arevalo between 1792 and 1798. Today the vaults make for a charming shopping experience, as they are filled with Colombian handicrafts to bring home as souvenirs.

Mapale Dancers
Spot Mapale dancers in "Parque Bolivar", "Plaza Santo Domingo", or "Plaza de los Coches". These troupes, usually accompanied by a couple of drummers, perform a stunning dance that can trace its origins hundreds of years back to Africa.

Convento de la Popa
Close to the San Felipe fortress is the 150m high La Popa hill, which offers great views over Cartagena and the harbor area. The 17th century Santa Cruz monastery is there, which has a beautifully restored courtyard and a fine image of the Virgin of La Candelaria.

Museum of Modern Art
Founded in 1959 in a former customs House on the corner of Plaza San Pedro de Claver, the museum keeps its permanent collection on the ground floor and holds temporary exhibitions upstairs. The highlights are the works by Obregon, who was born in Barcelona and raised in Barranquilla, but fell in love with Cartagena and later made it his home. Obregon's paintings and sculptures are considered amongst the most powerful contemporary works created in Colombia.

Café del Mar
Sip a fresh mojito at Cafe del Mar during sunset. No other bar in Cartagena offers such an amazing view from atop the historic fortress walls; you'll be overlooking the city rooftops and the Caribbean Sea.

Getsemani Neighborhood
Stroll or rent a bicycle to tour through Getsemani. This neighborhood has its own character that reveals itself the moment you see "La Puerta del Reloj" (the clock tower). This bohemian neighborhood was originally built for slaves in the 18th century. Now its charm is reminiscent of Old Havana and the short, pastel-colored houses enchant everyone who visits.

Horse-Drawn Carriage Ride
Picture yourself touring Cartagena in a comfortable, nostalgic, horse drawn carriage. History comes alive as your driver/guide takes you back almost 500 years in time. No matter where you are, in Cartagena, you're never far from a pick-up point. And, if you see an empty carriage pass by, just hail the driver. Drivers are very service-oriented and will do their very best to show you a good time. The best time to take a ride is during sunset, when you can observe the night take over beautifully.

Rosario Islands
The "Islas del Rosario" is a small archipelago located south of the bay of Cartagena, only 45 minutes away by boat. It is one of the 46 natural national parks of Colombia. The national park was founded in 1988, to protect one of the most important coral reefs of the Colombian-Caribbean coast. "Isla Rosario" has an aquarium and open-sea oceanarium that people can visit.  There is hiking, biking, snorkeling and scuba diving. Boats make day trips, leaving Cartagena in the morning and the islands in the afternoon.

Isla de Tierrabomba
Isla de Tierrabomba sits in the mouth of the bay and you must pass it to enter Cartagena's harbor. This island offers miles of shoreline, mango groves, horseback riding, resorts and a three hundred year old military fort (Fuerte San Fernando de Bocachica). Across the channel from San Fernando is another fort called Bateria de San Jose on the island of Baru. Baru is a long island with dozens of resorts and beautiful white sand beaches. The best way to access both islands (and the only way to get to Isla de Tierrabomba) is by boat. We will organize a day trip to Tierrabomba on Sunday, June 4th (See this page for more info!).