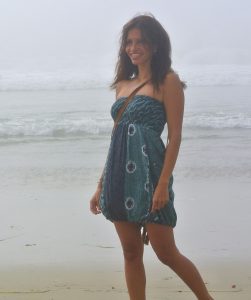 Ximena is a self-proclaimed citizen of the world, originally hailing from Ibague, Tolima, Colombia. Ibague is the music capital of Colombia and is filled with volcanic mountains, glorious coffee, exotic fruits and birds, and wonderful people. As a child, she was always the creative type, organizing the neighborhood kids for fashion shows and creating new games for everyone to play. Her love of travel started as an 11 year-old when she moved to Canada to live with her Aunt Vicky and Uncle Cliff and learn English for a few years. While there, she saw snow for the first time (Which she misses dearly...), learned to ski, and discovered many new activities she didn't have back in the homeland. She also loved setting trends for all the other kids who found her exciting and exotic!

When she came back home, she finished primary school and enrolled at Universidad Externado de Colombia in Bogota, where she studied hard to be top of her class. She won several scholarships, giving her the opportunity to continue graduate studies in Business in France.

In Montpellier, she continued her mastery of the French language, studied Business Management, and worked as an au-pair and a candle maker. The candle girl then took off for work in Israel to learn yet another language. She started off working as a waitress while learning Hebrew, before taking a job working online marketing for a casino and poker group. After 5 years of full-immersion in the Israeli culture, she officially became more Jewish than Matt.

This leads us to Las Vegas... Ximena took a job doing online marketing for a gaming company, which based her in Las Vegas. She moved from this industry after it fell apart, but continues to thrive under the bright lights of the city. Xime is a gastronome with a love of experiencing new cultures. She is a great swimmer with a knack for arts and crafts. Above all, she is a great person who loves everyone around her very much and would do anything for her family. Not to brag, but she's kinda awesome.

Matt is from the small town of Woodstock, IL (Not where the concert was, but where the movie Groundhog Day was filmed!). He was always solid in school and was a great speller. He had spelling bee national championship on his mind until his career was derailed with a controversial second place finish in the Dean St Elementary School Spelling Bee. He would never fully recover, but luckily had other interests.

He grew up with a love of playing sports; mainly soccer and basketball, but he did play tee ball on Wrigley Field once. When he realized it was not the best game-plan to become the next Mugsy Bogues (aka – he realized he was too short for basketball), he focused his attention on soccer and spent a lot of time with his parents driving him around to tournaments throughout the Midwest.

Family vacations and soccer developed Matt's travel interests as family cruises opened his eyes to the Caribbean and soccer gave him the chance to play in Portugal one summer.

As a child, Matt was a good negotiator (ask his brothers about his sticker store) and always picked the most expensive food item on the menu without looking or realizing it (or did he...). His parents knew he would need to get a good job to cover all the food he would eat as an adult, so they enrolled him at Washington University in St Louis. He initially selected that school as one of the best schools that he could both play soccer at and obtain a degree in biomedical engineering. Shortly thereafter, the engineering took over as the focus and he was on the way to a degree with a focus in biotechnology and joined the same fraternity as his dad and uncle. While at WashU, he developed a cohesive unit of engineering partners, Sigma Chi brothers, and a team of Superfriends who are all still very close to him today. While taking engineering classes, he did research in an Anatomy and Neuroscience laboratory where he mapped out the parietal cortex of the brain using fMRI scanners and trained monkeys. It was great!

In his junior year of college, some of his friends introduced him to a company by the name of St Jude Medical. He began interviewing there and after about a year and a half of interviewing, got a phone call from the head of the hiring division saying, “Pack your moneybags, you're moving to Vegas.”

Ten years later, Matt is celebrating his 10th anniversary with St Jude and continues to develop on his career. Matt enjoys new foods in new places and, while not a huge fan of the desert heat, has made it his (and Ximenita's) home... His soccer career hasn't taken off, but maybe it's time to give the spelling career another chance?